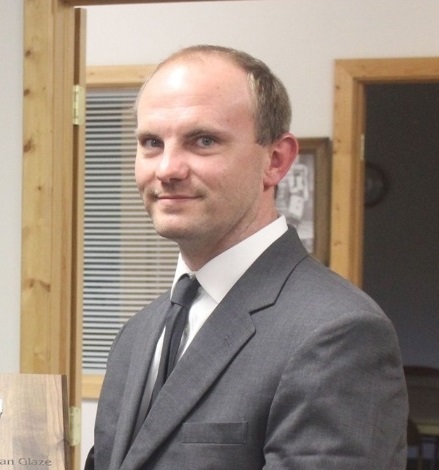 There will be a squad procession open to all law enforcement agencies to a private graveside committal for the Glaze family and members of the Rusk County Sheriff’s Office after the service.  The squad cars in the procession should pass the committal site before traveling home.

Parking in Cameron is extremely limited. Those squads wishing to take part in the procession will need to arrive at the service venue, 600 Wisconsin Ave. in Cameron.  Other attendees are encouraged to park at the Mosiac Telecom building (401 South 1st Street(CTH SS), Cameron, WI) or St. Peter Church (1618 20th Street; corner of USH 8 and Creamery Rd), Cameron, WI) and take the shuttle service to the venue.  The shuttle service will run from the parking areas beginning at 9:30 am until 12:30 p.m.  Return shuttle service will also be provided.

Obituary Information
Deputy Glaze attended Wisconsin Indianhead Technical College in Rice Lake, graduating in 2006. Upon graduation, Dan was hired by the Fall Creek Police Department and served there until being hired with the Hayward Police Department.  While working for Hayward PD Dan also worked as a Sawyer County Sheriff’s Department Deputy working in the jail and doing prisoner transports.   In 2015, Dan took a job with the Rusk County Sheriff’s Office where he served faithfully and honorably as a Patrol Deputy. At the age of only 33, Deputy Glaze’s time with us was short, but his service will forever be appreciated. Deputy Glaze is gone, but not forgotten.  He leaves behind a wife (Sarah) and three children, (Kendall, 18; Levi, 5 and Eliana, 5 months).

For those who may need to stay in the area: